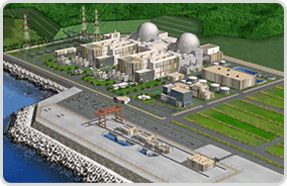 The reactor type of Hanbit Units 3 & 4, which is the reference power plant in developing Korean Standard Nuclear Power Plant (KSNP), used the System 80 reactor type by ABB-CE of the U.S.A. as the reference model, the technology from the accumulated experience of KEPCO E&C since the foundation in 1975 and the newest design technology standards were applied. The construction of Hanbit Units 3 & 4 were completed on March 31, 1995 and January 1, 1996, respectively, to achieve 95% self-reliance in engineering technology, as well as accomplishing operation performance exceeding the expectations since the beginning of their commercial operation. Thus, along with the favorable comments by the world, Korea has become the country being equipped with capabilities for independent nuclear power plant engineering technology. Afterwards, using Hanbit Units 3 & 4 as the reference power plants, Hanul Units 3 & 4 were constructed and each began its commercial operation in August 1998 and December 1999, respectively. Thus, eventually, a unique nuclear power plant brand, Korean Standard Nuclear Power Plant (KSNP) has seen the light of day.

Regarding OPR1000, by repeatedly designing 6 units including Hanul Units 5 & 6, and Hanbit Units 5 & 6, the overall supplement points of preceding units were continuously improved and reflected to be equipped with optimal economic feasibility and safety. Accordingly, the nuclear experts of International Atomic Energy Agency (IAEA) made evaluation close to being a praise on OPR1000 as “the safest nuclear power plant of all the 1000MW class nuclear power plants being constructed in the world”, at that time.

KSNP means Korea’s standard nuclear power plant, which was called KSNP at the time of development, but in 2005, recognizing the need for a brand for international market in order to export nuclear power plants, the name was changed to OPR1000 (Optimized Power Reactor), which means the ‘optimized water reactor’.

Later, doing away from making partial improvements through repeated construction, a comprehensive improvement in design was conducted, so a new improved OPR1000 (Improved OPR1000) was born, which is much improved in technology and economic feasibility, and has secured international competitiveness. The improved OPR1000 was applied to Shin-Kori Units 1 & 2, and Shin-Wolsong Units 1 & 2, securing the performance record for 12 nuclear power plants in the OPR1000 line. Furthermore, OPR1000 was chosen as the reactor for the North Korea Light-water Reactor Project based on the Geneva Agreed Framework, to record first international stage advancement for Korean nuclear power plants. This way, through the OPR1000 designed by KEPCO E&C, Korea has become the world power of nuclear that has estsblished independent nuclear model.

The Characteristics of OPR 1000 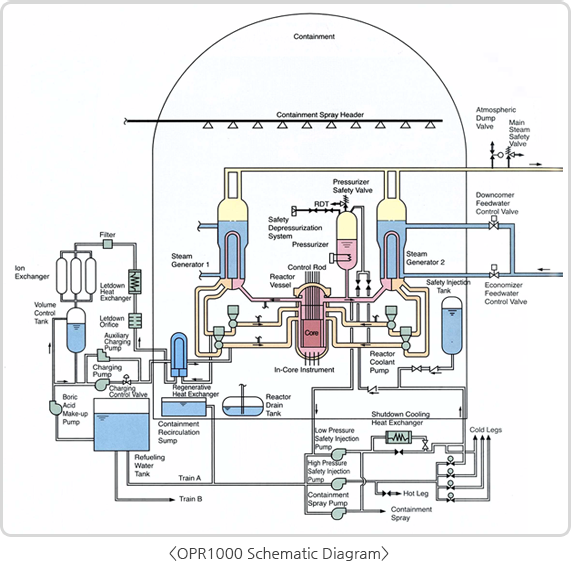 The biggest advantage of OPR1000 is the world’s top class safety. It has reflected all the follow-up requirements after the TMI Accident, and applied the concept of prevention of serious accidents and mitigation of accidents. Furthermore, based on defense-in-depth concept, the redundancy, diversity, and independence of safety related equipments, and safe operating principle in case of a breakdown were applied. In addition, OPR1000 has proved its excellence in operation performance. Hanul Unit 3, which started its operation in 1998, has achieved average usage rate 103.7% in the initial 1 year, to record world-class performance in breakdown or stop aspect or operation without breakdown during one cycle. OPR1000 adopted digital power plant protection line and engineering safe equipment operation line for the first time of the world’s nuclear power plants, so is showing outstanding performance in the reliability aspect.